I’ve been tinkering with an idea to carry out ethnographic research by conducting interviews about biking habits while on a bike with that person. Doing a few test runs with my fellow grads I found that it could be doable. A possible adaptation could be simply setting up a camera on someone’s bike, and recording their thoughts as they move through the streets, operating as a video version of a photo journal.  The idea originally comes from Jerry Seinfeld’s Comedians in Cars Getting Coffee. Despite the fact that most of the series is celebrities riding around in luxury cars, I find the method to still be accessible and humanizing. Transforming city streets into bike-able thoroughfares requires a shift in perception of bike riders from marginal nuisances to real people on bikes.

In my efforts to experiment with the idea of dérive and try to get lost on my bike in order find new places and map my own surroundings, I took the opportunity on my commute home the other day. Biking on city roads gives you an intimate feel of every bump, every variation in lane width, every moment of marginalization. But it also allows you to be in the air through which you are moving, connecting you to your surroundings in a way a car cannot, allowing you discover new places or chat with the person biking next to you. 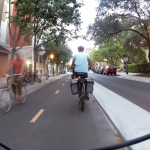 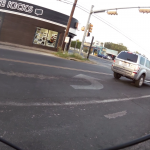 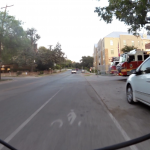 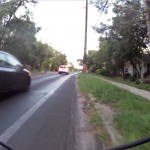 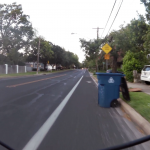 Recycling bin in a bike lane 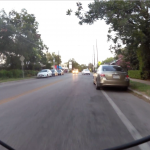 Car parked in a bike lane 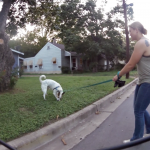 Chatting with roommate and dog

Lastly, I’m taking a class on transportation planning and policy, and it’s interesting how simultaneously abstract and defined the act of mobility is discussed; quantified data on commutes are aggregated into broad streams of human movement; landmark upticks in bike commuting culture register as a slight curve in an otherwise flat line;  “derivative” commuting acts of “dis-utility”1 are numerated on the scale of billions and trillions.

An interesting trend that was brought up was the increase of single-occupancy vehicle use in immigrant drivers over time. Immigrants comprise larger numbers of carpooling, biking, walking, and transit use in their early years in the U.S., but the longer they are here those habits all but vanish2. This could be an indicator of a distinctly American car-culture influence, one bolstered by national concepts of liberty and independence–an idea I’d like to explore as both a chief barrier and proponent to bike commuting.